Ayotzinapa, the Debates, Colombia, India and Ethiopia – The week in review 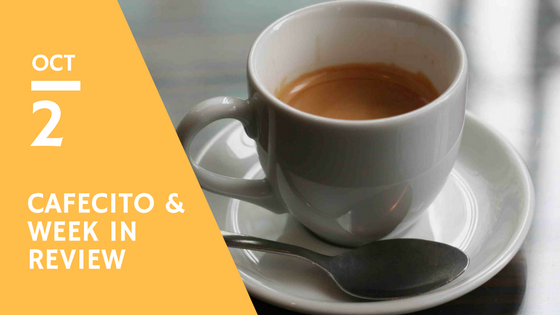 I am sipping a nice hot latte while sitting outside listening to the birds sing their evening songs. There is nothing that I love more than to be outdoors enjoying fall weather.

My latte is a decaf, since my cutoff for caffeine is about 3PM. It seriously took me decades to figure that nugget of brilliance out. I always wondered why I could not even begin to sleep until well after midnight in my twenties and thirties. It served me well, as I just used that time to pump out work. One day a colleague pointed out that I drank a lot of coffee and that I should have a cutoff point to see if that was keeping me up.

Sure enough, that was the issue. I still struggle with sleep and quieting the buzzing mind, but at least I know it’s not the caffeine.

Speaking of a buzzing mind, man was there a lot going on in my head this week. I’m sure it comes as no surprise that the first presidential debate was foremost in this political junkie’s mind. I was also reminded that this past week marked the second anniversary of 43 families’ worst nightmares, the 43 missing college students from Ayotzinapa.

The entire thing was comical and frustrating all at once. Clinton basically stepped back and let Trump essentially hang himself with his comments, boasting and bullying. I couldn’t believe this was called a debate.

In a debate there are rules. You generally have to wait your turn to present your rebuttal. You listen while your opponent is making their claims and write things down that you plan on arguing or disproving. This was no debate. It was one person constantly interrupting with 5 year-old tantrum speach like “that’s a lie”, “no”, “nah-ah”, etc.

I would love to hear an intelligent debate about issues and specific things each candidate will do to address those issues. The week following this debacle has been a crazy one with rotating headlines of accusations and bad behavior.

For those who don’t know, two years ago Monday, 43 students left their college in Mexico to attend a protest and never returned. The mass kidnapping has been a thorn in the Mexican’s government side for the last two years as parents and the international media have all accused them of hiding what really happened.

The facts in the story are that the students took buses to participate in a demonstration, and they were stopped by Mexican police and soldiers who started shooting at them. When all was said and done, many students returned injured and shaken, and 43 went missing.

The president of Mexico, Enrique PeÃ±a Nieto, launched an investigation, but the results alleged that the police handed the students over to a drug gang who killed and burned the bodies. There was an independent investigation that later debunked the “burning” theory as the bodies were not where police said they were. The new investigation was inconclusive, citing stonewalling by Mexican officials.

The most popular theory is that the JosÃ© Luis Abarca, the mayor of Iguala, asked police to stop the group so it didn’t disrupt an event his wife was holding nearby and it went too far.

The whole story is just sad and reminds me of how privileged and lucky I am to be in this country. It’s not perfect, but we are eons away from these types of occurrences.

I discovered someone new I really dig on Rays Latino Podcast. His name is Tony R Sanders, and he is a sales training expert who practices Solution Based Selling.

I really enjoyed this Facebook live video of his and thought I’d share it with you. It’s about confidence.

My favorite podcast, The Little Radio Show posted a couple of new shows, so that made me a happy lady this week. It’s definitely the little things with me. Epidose 56 was mainly about Juan Gabriel. As they stated, he was like the “Frank Sinatra” of Latinos everywhere. I grew up listening to him, watching novellas with his songs and generally enjoying him as part of the soundtrack of my life.
He is credited with having authored over 1700 songs, and he was a very giving and beloved artist. His passing is sad, however, he has left us with an amazing body of work with which to celebrate him.

There were quite a few things this week that I though were important but nowhere in the mainstream news outlets. Or at least they were buried so deep that no one really paid any attention.

I always check CNN, BBC, and many other news sites for may daily dose. It never ceases to amaze me how dumbed down our news is! Seriously, I’m going to rattle off a few important things going on in the world, and this garbage is on the front page and int he top.

Some things that should have been covered:

Colombian voters rejected a peace deal that promised to end 52 years of war. The government in BogotÃ¡ has been fighting the Revolutionary Armed Forces of Colombia (FARC) which has claimed more than 220,000 lives and displaced millions. If approved, the deal would have allowed most FARC fighters to avoid jail time as well as transforming the guerrilla movement into a political party with a presence in Colombia’s congress. Read more here.

A deadly stampede broke out on Sunday during a religious festival in Ethiopia after police responded to an ethnic group protest. Police sprayed tear gas into the crowd which triggered the stampede. According to the Oromia governent, there are 52 confirmed deaths.

The Oromo, Ethopia’s largest ethnic group, is demanding more proportional representation in government, which is currently dominated by the Tigray ethnic group who represents only 6% of the population. Approximately 500 people have been killed since November 2015 when the Oromo began demonstrations according to Human Rights Watch.

India & The Paris Climate Change Accord

India joined the United States and China on Sunday, ratifying the Paris climate change deal at the United Nations in New York City.

Well there you have it. That’s my short primer on world affairs. The list would be really long, but I think I’ve either bored you or over-informed you enough. I hope the week ahead is a little less full of Trump-isms and filled with some good news.