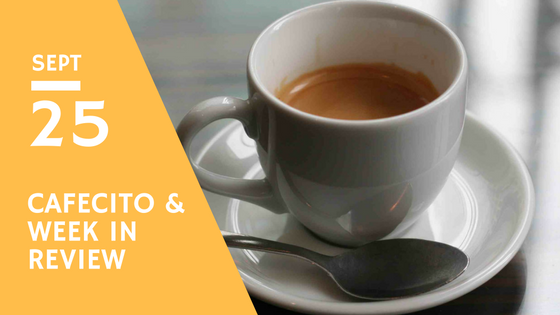 As I grab my second cup of cafecito, I look out on an expansive field of green here is Williamsburg, Virginia and think about the past week.

As you can imagine, this political junkie is super excited about the debates tomorrow night. Then again, I’m also not expecting the moderators to get me the information I want and need to really get to know where one of these candidates stands on the actual issues policy-wise. But it will still be highly entertaining if nothing else. Oh hell, I still have hope that it will be politically relevant. Let’s call me my least favorite cliche, cautiously optimistic.

I’m not alone in my distrust of where the mods will take us. Check out where the media stands in new NBC/WSJ poll.

Here are the favorable/unfavorable ratings in the new national NBC/WSJ poll pic.twitter.com/DuYoxV5rbi

The candidates are neck and neck as of this writing according to a Washington Post/ABC News poll released today, September 25, 2106.

The candidates & their supporters

Ted Cruz came out in support of Trump. While it is expected it is also shocking to me that a man would support someone who publicly offended his wife and father. But this is politics, so anything goes.

The New York Times endorsed Hillary Clinton, which was also expected. Also, an icon of the Mexican ranchera music, Vicente FernÃ¡ndez , came out of retirement to endorse Clinton. He did so by composing a “corrido”, which is a narrative song usually about history, daily life or socially relevant topics. Culturally, it’s a pretty darned cool thing. Before he begins singing, he tells Latinos “Our voice is our vote. Together we can.”

Police released footage of Keith Lamont Scott’s shooting this week. This was another publicized police shooting of a black man. Also, the police officer, Betty Shelby, who shot an unarmed black man, Terence Crutcher, has been charged with first-degree manslaughter. The latest shootings led to protests and riots in CharlotteThis is such a polarizing issue and it is so sad that our country is so divided by it. Growing up in the hood as a Cuban immigrant, you just knew that you are a minority and everyone pretty much just lived with each other and integrated. We were all more focused on surviving and trying to move up. I mean, there was racism, yes, but it felt at the time that it was dying away with the older generations.

I have definite views on this issue. Let me preface what I am about to write with, I do believe there is a problem and something certainly needs to change. What this post is about, is the perception of this issue by the public and why it is so polarizing.

I think that as long as the BLM movement and the media continue to mostly brandish people with a criminal past as the victims, they will lose out on getting their message out. What isn’t being realized is that the majority of people who don’t agree with the movement are looking at it as, keep your nose clean and you won’t have to worry about the police.

BLM is asking people to feel sorry for or sympathize with people they view as criminals who do not respect the law. I think when we start to see more situations where this is not the case and law abiding citizens are being abused, there may be a huge shift in the narrative. When you show someone EVERYONE can really empathize with, the outrage from all Americans will be loud and clear and the conversation will move from us versus them, to let’s do something about it.

For example, during the Civil Rights Movement, the heroes of the movement, aside from Dr. King and other political leaders, were average people like Rosa Parks and the little girls in the 16th Street Baptist Church bombing. Little 6-year-old Ruby Bridges who needed an escort of US marshals amidst angry mobs just to go to school was an image that made people really see what was going on. Images like this gave the movement a voice and brought together everyone, because what parent isn’t going to be moved by children being treated badly? People are moved by a woman not being treated with dignity. The imagery needs to be such that people are moved by someone they see as an innocent victim.

Yahoo gets hacked to the tune of 500 million accounts.

The fact that this happened in 2014 and we are hearing about it two years later is disturbing. Although,more disturbing is the fact that it is believed to be state sponsored, as in, another country is behind this hack. Most folks think that their Yahoo accounts have no important information, but the hackers don’t just look for other account information. Once they are armed with your email username and password, they will use those to try and access online accounts everywhere from banks to travel bookings, to even games to find points to resell. The takeaway from this is to have different usernames and passwords everywhere, or at least use a different one for emails versus other accounts.

The end of Brangelina

I really didn’t even want to write about this. The fact that it was front page news on CNN was pretty gross. The only reason it’s newsworthy to me is that there is now an allegation of a possible abuse that is being investigated by the FBI. There is chatter that Brad Pitt has been having an extramarital affair. My only response is, why is anyone even remotely shocked that a relationship which started in infidelity is now ending in, you guessed it, infidelity?

As usual, it’s the kids that get me, and now these kids will come from a broken home and they will know every sordid detail, since it will be all over the news.

Ugh, seriously? Can’t we just lock this perve away already? It appears that Anthony Weiner was sexting with a 15-year-old girl. I feel so sorry for his wife. She will some day have to explain what a total sh*t of a father her child has to him. Seriously though, even though he is being investigated by federal prosecutors, I sincerely hope that this turns out to be a lie for the sake of that child.

On the personal front, I spent a lovely day with my boys, daughter-in-law and husband yesterday. Our youngest had a baseball game, which the hubby and eldest both coached. The team lost 7-10, but it was a fun game and we had a blast. There is nothing that makes me happier than when I get everyone together and we just do family stuff. My cousin likes to call it “making memories”, and I totally agree. I love making memories.

So that’s it for my review of this week. I hope you have a wonderful week ahead, and thanks for reading. Now go make some memories with your clan!